The classic chapel cap is often a veil of choice for little girls, because there's nothing to hang down and distract them. Nothing within the range of visibility to tempt them to pull or fold or twist. I made one with trim that sort of hugs the scalp, so it stays put a little better. Then I put a metal clip in the center and thought I was all set. Problem solved. 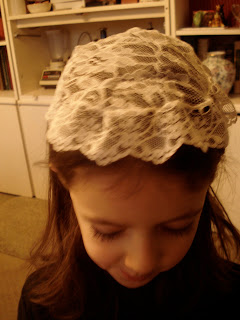 But little girls who are old enough to keep quiet during the Mass are often still young enough to begin to fidget incessantly sometime between the Gospel and the sermon. This child often manages to end up looking like she's got a Brillo pad stuck up on top of her head by Communion. Do you know the look I'm talking about? 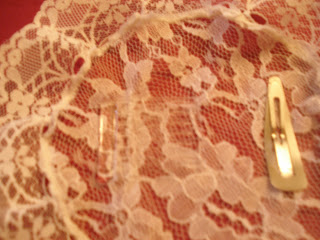 So, I sewed the clip in towards the back and added a clear plastic comb (you can barely see it here), towards the front. 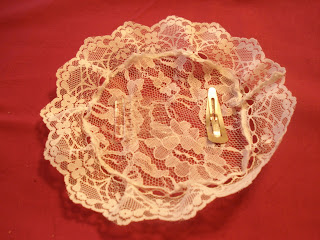 Here's hoping this will do the trick. I'll keep you posted about that some time after Sunday. 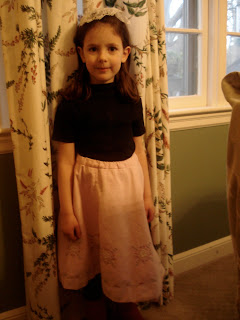 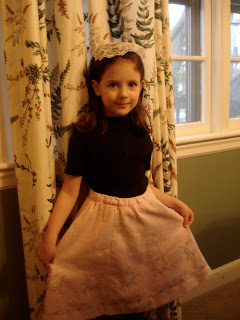 
Here's a detail from Bartolomeo Vivarini's (c. 1432 – c. 1499), "Saints Dominic, Augustine, and Lawrence".
St. Lawrence is typically depicted with the Gospel and a gridiron or grill.

Below, Francisco de Zubaran's (1598 –1664) "St. Lawrence". As with most all his paintings, the use of light and dark here signifies a certain level of intensity. The saint is conversing with heaven. The angle of the staff and grill, and the positioning of his hand over the breast combined with the saint's upward gaze all makes for a dramatic presentation. 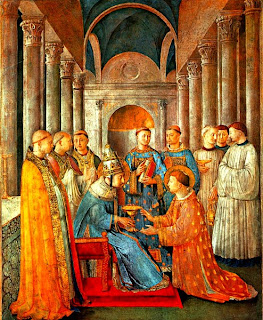 Lawrence was one of the seven deacons of Rome.
Aren't the blue vestments unusual?

The picture above and the next three below are all frescos and painted by
Fra Angelico (c.1395 –1455), who as Vasari put it, was known to be a "simple and most holy man....most gentle and temperate, living chastely, removed from the cares of the world."
(Gardner, Art Through the Ages)

I think one gets a sense of his character here in the quiet lines, and in the stillness and orderliness in these delicately ornamental paintings. 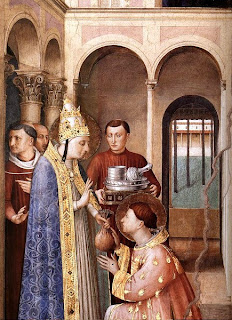 Lawrence was charged with the responsibility for the material goods of the Church, and the distribution of alms to the poor. 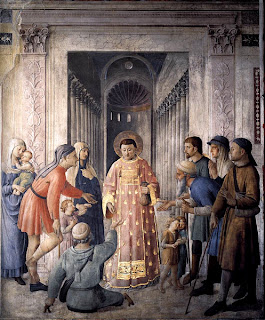 The Church in Rome was under persecution by the Emperor Valerian (253 to 260), and Lawrence knew he would soon be arrested. Lawrence sold all the sacred vessels and the altar's golden candlesticks. He sought out the poor, then he gave them all the money he had.

Now the prefect of Rome was a very greedy man. He sent for Lawrence and said to him,

'I am told that your priests possess gold candlesticks for your Masses. Furthermore, I'm told that the sacred blood is received in silver cups. Now, your doctrine commands you to, 'render unto Caesar what is his'. Therefore, you must bring me these and anything else of value, for the emperor Valerian desires them. Your God brought no valuables into the world with him, but only words. You must give me the treasures, therefore, and you may keep his words.' 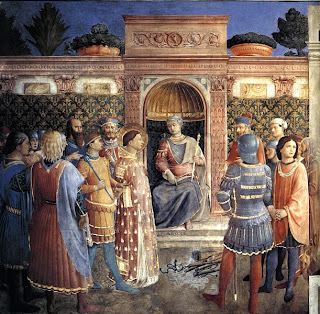 Lawrence replied, 'I will bring you the treasures of the Church. However, I need to take an inventory.' After three days he gathered the orphans and widows, the poor and the elderly. He brought these to the prefect and said, 'These are the treasure of the Church.'


Four days after the pope was put to death, Lawrence and some other Roman clerics suffered martyrdom. Lawrence was tortured in the cruelest of ways. The prefect had a gridiron prepared, the coals beneath it were lit, and Lawrence was placed on it.

It was in the midst of this torture that he cried out:

'I am already roasted on one side! If thou wouldst have me well cooked, it is time to turn me on the other!' 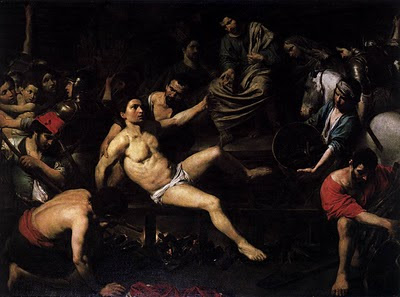 Above, is a painting by Valentin de Boulogne (c. 1591-1632), "The Martyrdom of St. Lawrence". Caravagio had a great influence on this work. This is true catholic Baroque, Counter-Reformation art.

Below, is a sculpture by Gian Lorenzo Bernini (1598 –1680), "The Martyrdom of St. Lawrence." It's an example great technical skill. The artist created fire and smoking hot coals from marble. I'm not sure that's ever been done before or after this piece. 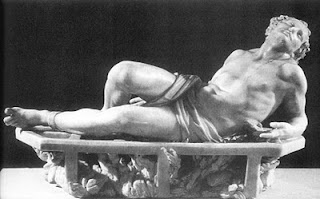 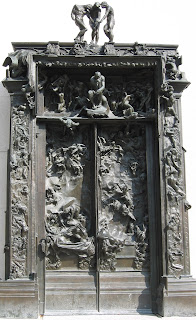 Below is a photograph from inside the Papal Basilica of Saint Lawrence outside the Walls, which was built over the saint's tomb. 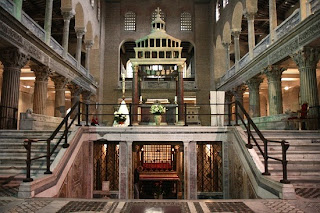 This Byzantine church is one of the seven principal churches in Rome and a destination of many pilgrimages. 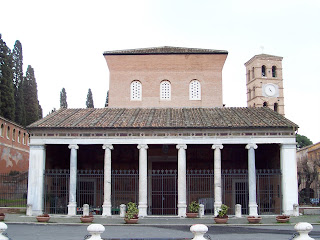 O Almighty God, Who didst give unto Blessed Lawrence power
to be more than conqueror in his fiery torment;
grant unto us, we beseech thee,
the power to quench the flames of our sinful lusts.
Through Jesus Christ, we pray. Amen.

More good stuff on St. Lawrence here.
Posted by Ann Anzul at 6:28 AM

Email ThisBlogThis!Share to TwitterShare to FacebookShare to Pinterest
Labels: Cloud of Witnesses. 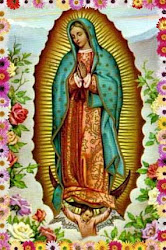 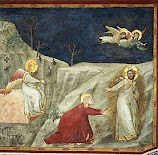 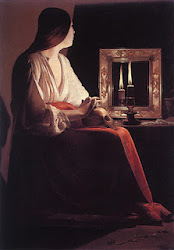 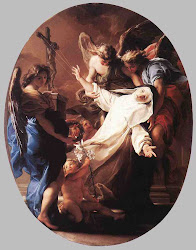 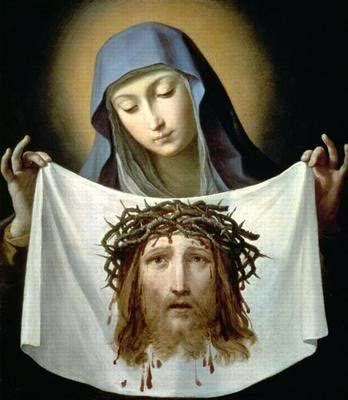 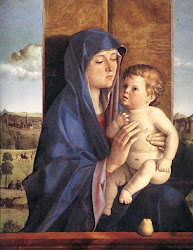 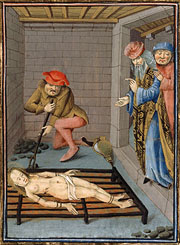 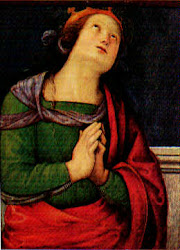 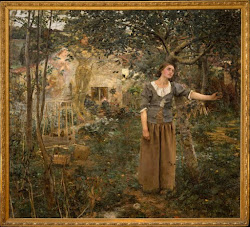 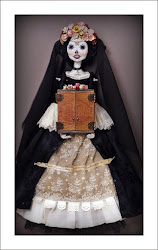 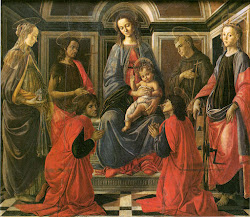 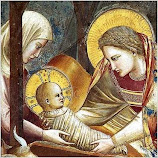 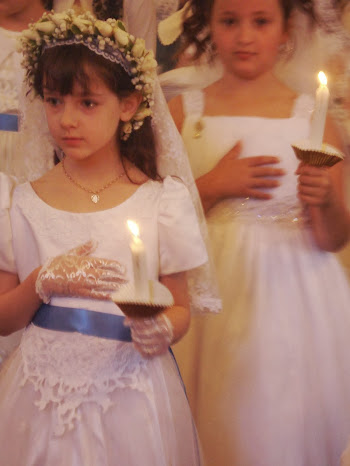